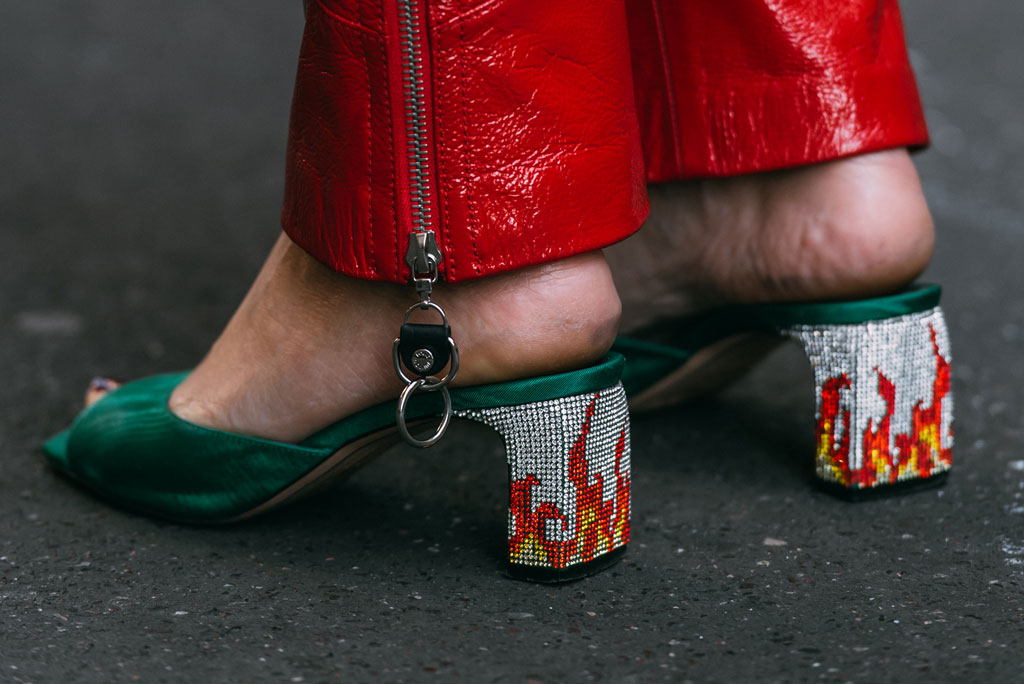 The designers below all have two things in common: they’re launching their second labels this spring, and each collection is as good as, or even better than, their previous incarnations. As second-time designers, they join the ranks of talents like FN’s Designer of the Year Amina Muaddi whose eponymous line was her own second venture. His first label was Oscar Tiye. These days, in addition to his eponymous label, Muaddi also designs shoes for his friend Alexandre Vauthier and last year marked a shoemaking gig for Rihanna’s Fenty line. As for the three upcoming labels, they may have some familiar names at the helm but each is offering something new.

When Givenchy hit in 2015, Italian shoe designer Pamela Costantini shuttered her eponymous shoe brand to work for the line. But now she’s back with a new, all-sustainable brand, IINDACO. The line is co-founded by Domitilla Rapisardi, who met Costantini when they worked together at Roberto Cavalli. With its fusion of architectural silhouettes, satin moray eels and quirky beaded disco heels (which were a hit at the Prada Moda party last Paris Couture Week), it’s a mix of both girls’ personalities. As for the name, IINDACO refers to the “blue hour”: the period just before sunset when a woman breaks out of her daily routine. It also happily coincides with the Italian institution of aperitif time. The duo only use upcycled fabrics and leather from the food industry – naturally tanned and biodegradable – and their signature blue dye is made from leftovers from the lavender production process. As for this double “I” in INDACO, it’s a play on duo, duality and a touch of serendipity all at once: the founders were both born in November, the eleventh month. Don’t miss the launch of the e-commerce site on February 11.

Two years ago, Mariela Schwarz Montiel launched Antolina, a shoe brand that supports indigenous communities in Paraguay where its fabrics are hand-woven using traditional techniques. Now, in her latest adventure, she features the equally eco-friendly Carlotha Ray. Launching today at the Le Bon Marché department store in Paris, the line of tall, eco-friendly sandals is made in Italy with 100% natural rubber from Madagascar. Their colors are derived from rice, algae, flora and eggshell. The delicate, scalloped patterns that run around the edges of the soles are inspired by French porcelain (the Parisian designer lives in Limoges and her husband is involved in the city’s traditional local economy). “There were no fancy beach shoes like this on the market, so I wanted to create an alternative,” Montiel said. Next season watch out for slippers: eco-satin made from 100% recycled plastic bottles and colored with natural dyes. “Giving back is very important,” said the Carlotha Ray creator added. “When you create a brand, you also have to do something good for the earth.”

Since the closure of former brand Charlene de Luca, trained architect Carlotta de Luca has been working as a consultant while planning her next move. And he’s a winner. Maria Luca will launch for Fall 2020 in partnership with Onward Luxury Group. In keeping with the jewelry trend, one of the distinctive features of the brand is the anklet on the left foot. “You can also remove it and wear it as a necklace”, specifies the designer. Styles include pumps, ballerinas, boots and sandals, and feature an architectural hourglass-shaped heel, a contemporary spin on a silhouette popular in the 1920s. insoles, details and even the shoe boxes, all done in olive green Maria Luca. The line is artfully complemented by a capsule collection of gold jewelry as well as three chic and functional bag styles, complete with olive interiors. Brand mantra? “Step your left foot forward and take risks,” because, de Luca says, “it’s only when you take risks that the best things happen.”